The pilot was directed by comedian and director Paul Rodriguez.

Sofia Milos and Emilio Rivera will also serve as Executive Producers if the show gets picked up. 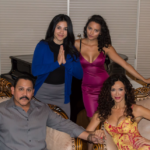